And just like that it’s mid-November! Juliet got dropped back in the water October 28 and sped around to Miami to get ready for the first charter… that was cancelled due to Hurricane Nicole. This gave us a little more time to put the finishing touches on the Forward Ensuite head and shower renovations and gave Liza a little more time to spend in the park with the boat cats. Yep, you read that right, cats. Plural. 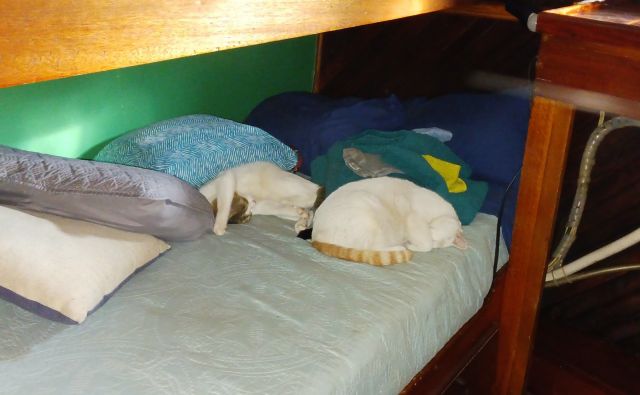 Meet Suave, the newest – originally temporary – addition to Juliet’s crew. He nuzzled his way into Liza’s heart at customs in Bimini on Sept 11, the text I received was of him asleep on her feet and her pleading “What do I do?!” The original intention was to take him stateside, get him fixed, and find him a home, as we’ve done many times in the past. However, this one managed to somehow win Rico over! Suave is quickly claiming Rico as his BFF, despite Rico’s occasional protests. So look for these two buds next time your on board.

There’s an album up on our Facebook page of the top-side facelift that Juliet got last month while in Tampa. The biggest and most noticeable change is the new railings and removal of the toerail, which were changed to help cut down on rust streaking down the side of the boat. The new rails are polished stainless steel, which never have to be painted and should resist rust a lot better than regular steel. We also replaced a few panels, bulkheads, bearings, the rest of the chainplates for the standing rigging, and did some maintenance on the beach (the teak deck about the main salon). A few of the hatches were removed to cut down on future leaks inside. To put it mildly, it was a busy month!

Juliet left Nassau this morning to head down the rest of the Bahamas south to Turks and Caicos. Then we’re on to Mayaguez for three Mona Island charters in a row (I don’t think we’ve done that since 2010!?). There’s still room on a few of those charters (Nov 26 and Dec 10) if that last email got you excited about some adventurous diving. Shoot us an email if you are interested. Oh and there’s also one couple’s cabin available over New Years in St. Croix…!

Until next time, fair winds and following seas!

Want to join the discussion?
Feel free to contribute!

Click here get news and updates in your inbox!